You cannot simultaneously be Pro-Second Amendment 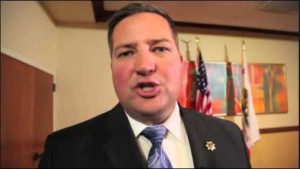 while at the same time violating people’s 2A rights.

A look behind the curtain

After he was elected as Sheriff in 2010, Scott Jones learned he was about to be sued.  A lawsuit was being brought by a prominent firearm rights group over ongoing illegal CCW policies within the Sacramento County Sheriff’s Department under John McGinness.

New CCW issuance did increase, but slowly.  At an average trickle of 2.5 new licenses per day, there was a huge growing backlog and months of delays.

But when Scott Jones decided to run for Congress against Ami Bera, Jones found a way to increase CCW issuance of new CCW to 4 per day, with almost 8,000 CCW licenses finally issued by year 6.

In a half-assed effort, Jones only staffed the CCW division with a few part-time deputies, retired annuitants, who were only there Monday through Wednesday.

Near the holidays?  Forget about it!  There were three months when the CCW division didn’t even set any new appointments.

There was routinely at least a 90 day backlog just to set your interview time, submit the CCW application, pay the fees, and begin waiting for the the background check to be completed by the backlogged California Department of Justice.

Being the emotionally charged and bitter individual that he is, a lightning rod for controversy, and at the heart of more scandals than any other Sheriff in California history, Jones has brought partisan politics into his CCW policies.  Through unpublished and underground policies, the Sheriff promptly began revoking CCW permits from democrats–even those democrats who supported his campaign for Congress and made the requisite donations as requested by Jones.

Over the past year, under Sheriff Scott Jones, the Sacramento Sheriff’s Department has been illegally revoking CCW permits from CCW permit holders without cause or any adherence to “due process”.  California State Penal Code §§26150-26225 exclusively controls the application for, issuance, maintenance, and revocation of CCW permits.  While running for Sheriff for a second term, and while running for Congress, Scott Jones’ pressured many CCW licensees to donate to his political campaigns, and continue donating.  For many of the donors who stopped contributing to Jones’ campaigns, their CCW license was arbitrarily and capriciously revoked without cause.

The purpose for Jones’ liberal CCW license issuance policy was as a political tool to entice gun owners to support Jones’ election.  But after Sheriff Scott Jones lost his race against Ami Bera for Congress, hundreds of CCW permits started being revoked without cause.  The official department reason was “no longer qualified”, but ranged from unverified hearsay evidence to a mere claim that a CCW license holder was less than fully cooperative with any law enforcement officer (in that officer’s opinion, which included refusal to disclose privileged information or bringing into play individual constitutional protections for privacy or against self-incrimination).  Most of the revocations had nothing to do with any actual law being violated, and the token “appeal” of the revocation offered by the Department did not even allow the CCW licensee to know what they were accused of doing ‘wrong’ in the first place.  How can you appeal a claim if you don’t know what the claim is?

No authority exists for the Sheriff to write his own new laws or expand upon existing laws.  While discretion does exist to issue a CCW, there is no authority to revoke a CCW permit without cause. (The criteria for good cause is outlined in the State statutes about CCWs.)

Federal due process protections also pass directly through the State and onto local public agencies.  But what does the law say on CCW revocation?  In California, the only two instances which empowers an issuing agency to revoke a CCW are conviction, and change of residency, namely:
Penal Code §26195 which states “(b) (1) A license under this article shall be revoked by the local licensing authority if at any time either the local licensing authority is notified by the Department of Justice that a licensee is prohibited by state or federal law from owning or purchasing firearms, or the local licensing authority determines that the person is prohibited by state or federal law from possessing, receiving, owning, or purchasing a firearm.”
and
Penal Code §26210 which states:
(a) When a licensee under this article has a change of address, the license shall be amended to reflect the new address and a new license shall be issued pursuant to subdivision (b) of Section 26215.
(b) The licensee shall notify the licensing authority in writing within 10 days of any change in the licensee’s place of residence.
(c) If both of the following conditions are satisfied, a license to carry a concealed handgun may not be revoked solely because the licensee’s place of residence has changed to another county:
(1) The licensee has not breached any of the conditions or restrictions set forth in the license.
(2) The licensee has not become prohibited by state or federal law from possessing, receiving, owning, or purchasing a firearm.
(d) Notwithstanding subdivision (c), if a licensee’s place of residence was the basis for issuance of a license, any license issued pursuant to Section 26150 or 26155 shall expire 90 days after the licensee moves from the county of issuance.
(e) If the license is one to carry loaded and exposed a pistol, revolver, or other firearm capable of being concealed upon the person, the license shall be revoked immediately upon a change of the licensee’s place of residence to another county.

However, through the making of prohibited underground policies, which are unpublished and failed to adhere to any rule making process, and through this Executive Branch agency functionally performing a Legislative Branch function which granted itself additional powers by expanding upon the scope of the legislative statutes, and Sacramento County Sheriff’s Department has not only violated Separation of Powers but also exceeded its authority to revoke CCW licenses by creating new undefined limits to its statutory authority.

The governing common law (case law) for CCW permits/licenses in California has been Nichols v. County of Santa Clara (1990), which held an issuing authority has absolute discretion to issue, deny, or revoke CCW permits, and that no “due process” was required at any level.  This is, of course, a violation of federal due process laws which require any government decision which has any finality must adhere to some level of due process, but that due process for one type of proceeding did not require the same level of due process for an unrelated proceeding.  Still, every proceeding requires at least some due process.  Nichols v. County of Santa Clara (1990) 223 Cal. App. 3d 1236, 1243.

Federal law requires due process for all agency procedures and decisions affecting government employees and members of the public. Federal government grants limited power to states but all federal requirements pass through to states.  Accordingly, a State government has no constructive power to grant itself new authorities which are without federal protections (Calder v. Bull).

After Nichols, in 1991, the California Court of Appeals issued a conflicting finding to Nichols which held “An elementary and fundamental requirement of due process in any proceeding which is to be accorded finality is notice reasonably calculated, under all the circumstances, to apprise interested parties of the pendency of the action and afford them an opportunity to present their objections.” Fortich v. WCAB (1991) 233 Cal. App. 3d 1449 [Emphasis added]

Then, in 2010, the California State Legislature rewrote the CCW statutes, considered and amended the provisions for revocation, and nullified previous court rulings by considering and refusing to adopt the restrictions of Nichols.  The Legislature specified the terms for revocation, and limited those revocations to exclusively a relocation of domicile and a conviction which places the CCW licensee in a prohibited class for firearms ownership.

Nothing else, according the lawmakers.  But now with hundreds of arbitrary revocations so far — most of which were without good cause in accordance with state law — Sheriff Scott Jones has proven himself to be someone who ignores the law and abuses his authority to issue CCW licenses.

Other candidates who are also running for Sheriff, have expressed a more liberal “shall issue” CCW policy for all people, regardless of political affiliation, and with better staffing to dramatically speed up the processing times.

The Sacramento County Sheriff’s Department needs a complete leadership overhaul.  It is going to take someone from the outside to come in and clean up the department.  An insider, who has been part of the problem, can never be expected to bring about the changes necessary to bring forth the integrity, transparency, and equality to the Department that Sacramento taxpayers deserve.